Be A Scale Hero 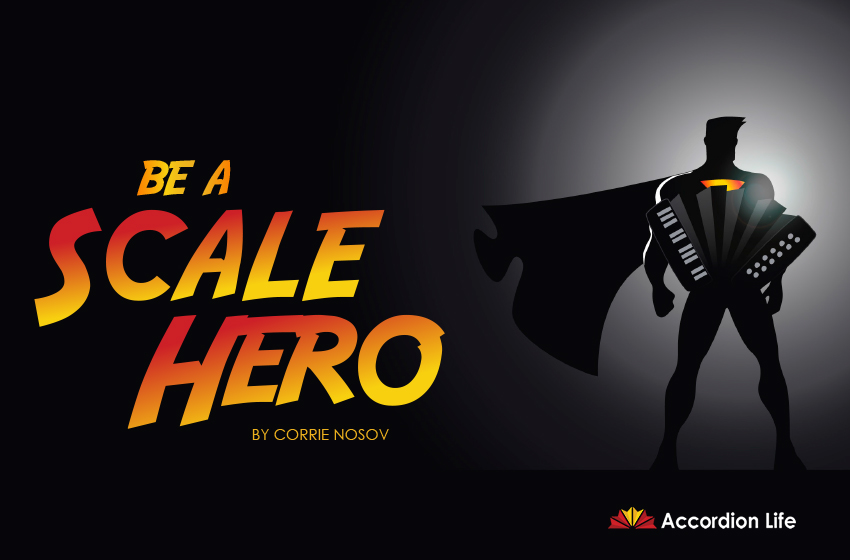 Scales? Why would I need to know my scales on the accordion? Why should I be a Scale Hero? That’s a great question! Let me answer it for you.

Scales are extremely valuable for many things. They make a great warm-up and agility exercise, but more importantly, when you know your scales you can more easily deal with key changes in any given pieces. You will be familiar with which sharps or flats you have in that key because you practiced that scale and know it well … and it will help tremendously with improvisation! Today, we will venture through the C, F and G Major scales for both the treble and bass keyboards of your accordion. Don’t worry, bass scales are simpler than you might think, so hang in there.

We’ll start with a basic concept that you may already know, but that’s good to review — finger numbers. Take a quick look at the diagram below. If you remember that “Thumbs are always 1,” you’ll have it made. Let’s get started mastering those scales!

The C major scale is perhaps the simplest scale for the piano accordion. No sharps, no flats — this is an all natural scale that is great for practicing fluidity and assigning various articulations for fun and musical growth.

For the purposes of this article, we’re going to cover one octave for all of our scales. See the diagram for the C major scale notation, going up. Finger numbers are below. There is also a piano accordion keyboard diagram so you can more easily visualize it. If you place your thumb on C, then line up each finger side-by-side on the white keys; you will be ready to go!

Start by playing fingers 1, 2, 3 in order, then drop your right shoulder so your thumb can play the next white key up without having to go completely under the 3rd finger, and shift your hand up. Then you just play fingers 1-5 in order. That’s your C major scale! If you have never done this before, it might feel strange. But as you continue to do it, you will get more comfortable and begin to develop fluidity and speed!

Going Down To C

Ok. I know I said that I would teach you the C, F, and G major scales for the bass as well. But, I’m only going to show you the C major scale. Hang in there. The reason is, when you know one major scale on the bass, you know them all! That is one of the cool things about the accordion’s standard stradella bass. I will first show you the patterns using the Hohner Piano Squeezebox Accordion app, then we’ll study the notation and the other scales.

Play C with finger 3, then, skipping one button, reach finger 2 up to play D. Then simply move finger 3 from C to play the counter bass of C, which is E. You’re done with the first part! See how the pattern follows a triangular shape?

This one looks a little like a box shape or two parallel lines. Start with finger 4 on F, then play G with finger 2. Move your fingers up to the counter bass row and do the same thing, starting on A.

Congratulations! Now you may finish with finger 3 on C, or start it all over again.

Let’s take a quick look at the notation for the C Bass Scale. Below, you see the scale with the finger numbers below it. See the underlined ones? In notation, when an accordion bass note is in the counter bass row, it will commonly be underlined.

Once you have mastered the C major scale on your accordion’s bass side, all you have to do to play the F major scale is start on F and use the same pattern I demonstrated for the C Scale. For a G Scale start on G. The same goes for every other major bass scale there is!

Congratulations! You are on your way to becoming an accordion Scale Hero! Let us know with a comment how you are coming along with your adventures!

4 responses on "Be A Scale Hero"