Are You My Type? Accordions: Similar but Different 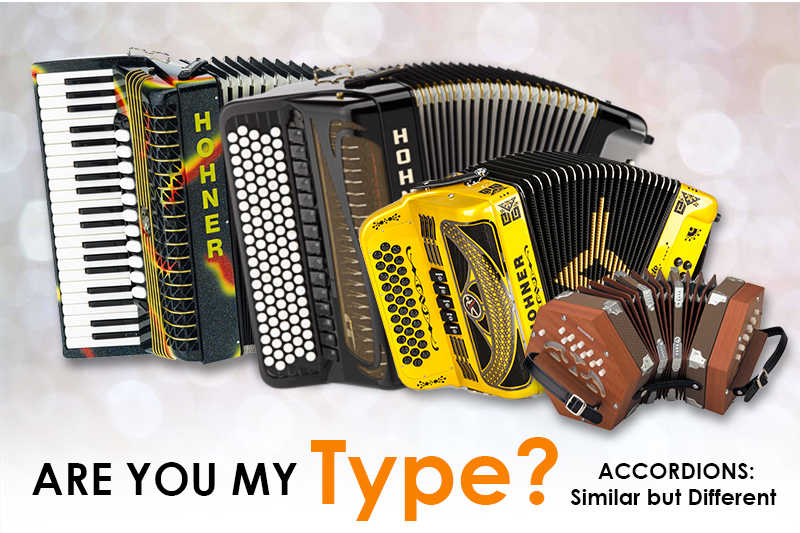 Piano accordion, diatonic, chromatic, b-system, c-system, bayan, squeezebox, button accordion . . . . so many names and types! If you’re new to the accordion world it can all be confusing and a little overwhelming. You may be wondering which type is right for you!  Though there are many differences, all accordions have this in common; they are all wind instruments with the sound being created by the movement of the bellows pushing air through the reeds. Come along with me for a quick tour through the different kinds of accordions and their music. 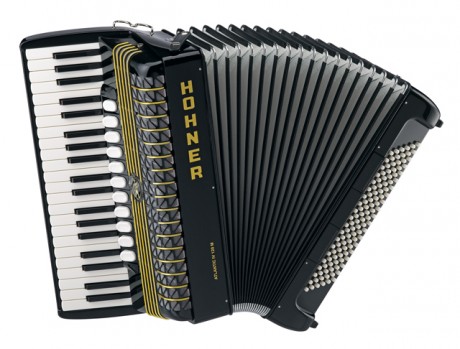 The Piano Accordion is the most common type of accordion in the United States. The right hand, Treble keyboard, is the same design and layout that you would see on any piano. The bass system can either be Stradella, French 3-3, or Free Bass. (For more information on bass systems, keep an eye out for my next article.)

Piano accordions are commonly sized according to the number of basses they have, such as 12, 48, 72, 96, and 120. The Treble keyboard of a full sized instrument can have approximately 3+ octaves of notes.

Most well known for Polkas, the Piano Accordion is versatile enough to play any style of music. In the US it is commonly associated with folk music, though it is being used more and more in popular, contemporary music. In Brazil, the accordion is possibly even more popular than the guitar, being used in pop music styles such as Sertanejo and Forró.
The video below is an example of a Piano Accordion performance by Grayson Masefield.

This piece is a popular piece performed on piano accordion by Sergey Lobkov.  I think you’ll recognize it. 🙂 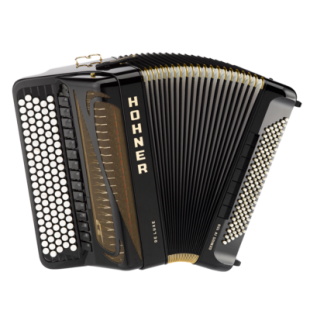 Commonly seen in Europe, the Chromatic Accordion is an instrument to be taken seriously. Chromatic accordions have a Treble keyboard that is made up of buttons instead of piano keys.  This allows for a greater range of notes, with the treble keyboard holding approximately 4+ octaves. The Treble keyboard is usually either C-System or B-System – with the notes arranged in a slightly different order on the keyboard with C being in the first row of the C-System and the third row of the B-System. Click on an image below this section for the full layout of the C-System and B-System accordions as shown on the Hohner Chromatic SqueezeBox Accordion Pro app.

While Chromatic accordions can be used for variety music, which is dependent on how the reeds are tuned, they are most known for being used in Classical music when coupled with a Convertor or Free Bass.  They are also popular for Russian Folk and Balkan music.

Other variations of the Chromatic Accordion include the Finnish C-System and the Russian Garmon (also known as Garmoshka).  Both of these also have a slightly different keyboard layout but are not as common as the C-System or B-System Chromatics. 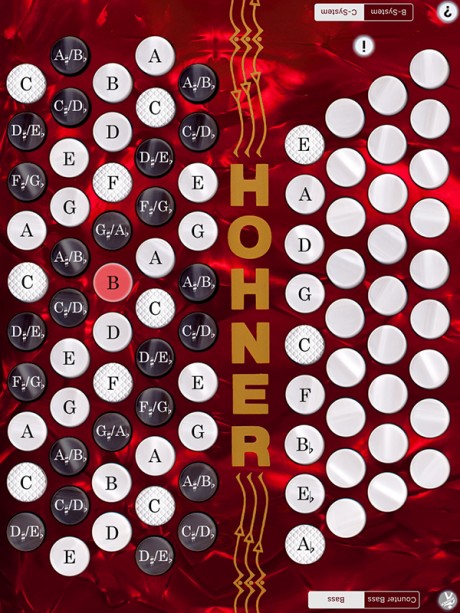 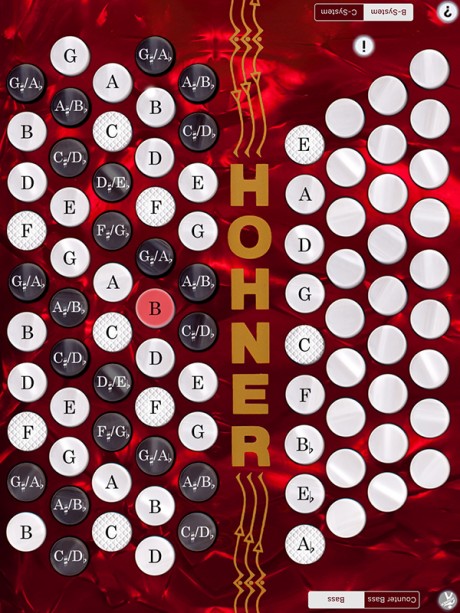 Below is another video of Petar Marich performing in a contemporary classical style: 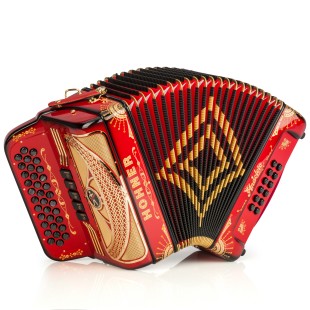 Widely used in traditional and folk music, the Diatonic Accordion is in a class of its own. Ranging from a single rows of buttons up to multiple rows of buttons, the fundamental difference between the Diatonic Accordion and the Piano/Chromatic Accordions is in the reeds – they are bisonoric, meaning that if you pull the bellows the notes are different then when you push. There are two different notes for each key depending on which way the bellows is going. This is the same for the Bass, which produces bass notes and chords that are different depending on bellows direction.

Because it follows a diatonic scale, it is also limited to playing in certain keys. A three row model might come in the keys of C, F, and G, or Eb, B, F. Other keys are also available. See the layout examples below from the Hohner SqueezeBox Pro app.

Single row Diatonic Accordions are very common in Irish/Celtic Music. While the model shown above is well loved by the Latino community for use in Norteño, Conjunto and Tex-Mex styles. The diatonic is also commonly used in Zydeco music.

A variation on the diatonic accordion is the Club System. This version of the diatonic has an extra row of ‘helper keys’ which allow the performer to play in any key they desire as long as the bass isn’t used. These can be well liked for Jazz music. 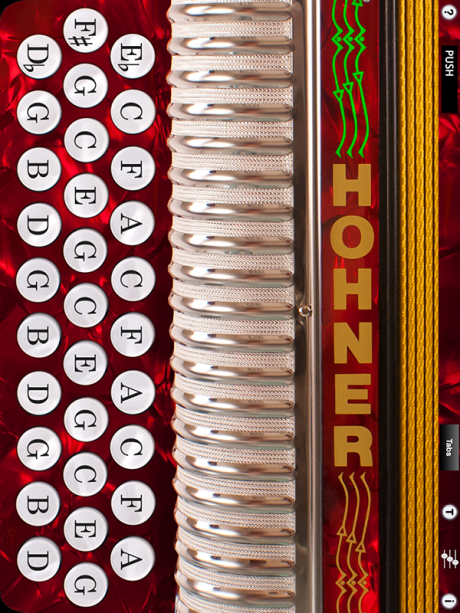 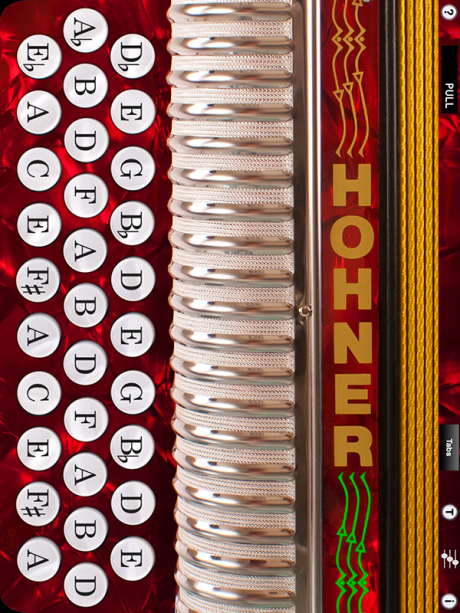 This fun piece performed by Andrej Gropajc even shows the inside of a diatonic accordion! 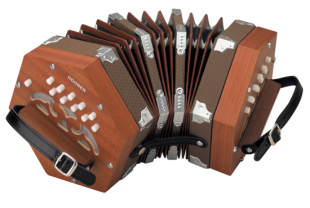 Concertinas are small, hand-held accordions that are unique from the previous types shown. Because they are so small, they were well loved for traveling and are often associated with sailors. There are several different systems of concertinas such as the Anglo, English, Duet, and German concertinas. Some systems are unisonoric like the Piano and Chromatic Accordions and others are bisonoric like the diatonic accordions. The concertina is used often in Ireland and Europe for traditional music.

If you want to try some of the systems for yourself, check out these apps by the creator of the Hohner SqueezeBox Pro accordion apps.
Noel Hill performs a medley of Celtic music on the concertina.

Worthy of special note in the concertina family is the Bandoneón. This system of concertina is quite a bit larger than its relatives and is supported during performance either on the lap or one knee. Bandoneóns are well loved for Tango music in particular as they possess a unique sound which is well suited for that style of music. One of the most well known Bandoneón players is Astor Piazzola who also revolutionized Nuevo Tango by incorporating elements of Jazz and Classical music into the Tango style.
Astor Piazzolla performs his composition Adios Nonino on Bandoneón.

Worldwide the accordion is used in many styles and genres of music. If we were to go traveling, we might hear a lot of Classical music in Russia, or enjoy the musette waltz sound of France, or the lively Celtic styles of Ireland and Scotland, and finally the romantic sound of Italy. Let’s not forget American Jazz! The accordion is such a versatile instrument and it has been fun sharing the different types of them with you!

Want to know more? Feel free to leave comments and questions below.  Next month we’ll visit the fascinating world of Accordion Bass Systems.

5 responses on "Are You My Type? Accordions: Similar but Different"