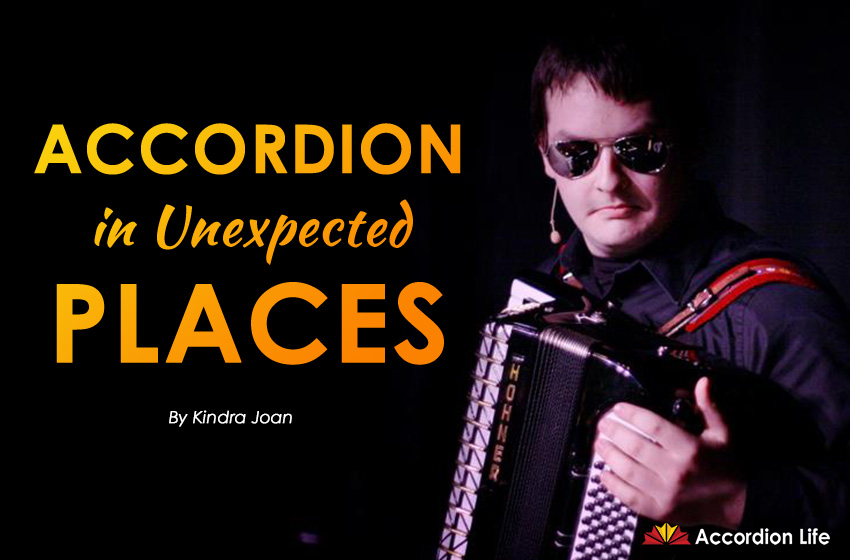 From Rock to Pop, Country to the soundtracks from the movies you watch, the accordion can be found in the most unexpected places.

Read on to find out where!

If you thought that pop was a style of music that completely skipped over the accordion, you would be wrong. Just one pop song that the accordion takes a prominent part in is Stereo Love by Edward Maya and Vika Jigulina. The song came out in 2009 and currently has over 295 million views on YouTube. The accordion in this song plays an instrumental several times throughout the song and is very cleverly used to support this style of music.

Stereo Love became a worldwide hit and rose to the top of Brazil, French, Duch, Turkish, Finish, Uk, Norwegian, Spanish, Swedish, and Irish charts. In 2011 it was awarded at Top Dance song at the Billboard Music Awards.

I recently had the amazing opportunity to attend a concert in Spokane, Washington, and got to watch a group of bands perform. One of the bands that played immediately stuck out to me. They call themselves Rend Collective and you could tell the moment the lead singer starting talking that they where Irish. Throughout their set I was delighted with their energy and unique instrument choices. While most Contemporary music now is played with popular instruments such as guitar and piano, Rend Collective had a very wide range of instruments from banjos, to something called a “Jingling Johnny” and yes, an accordion was used in their set.

After seeing their music in person I decided to do a little more research into the world of Christian Contemporary and to my delight I found out that Rend Collective are not the only artists whose music accordions can be found in.  Two other names that appeared when I started to dig around were King Kaleidoscope and David Crowder. King Kaleidoscope is a young group of artists who are known for the wide range of instruments in their music. From brass, percussion, wind, string, and woodwind instruments, they will always keep you guessing. I’m glad they have the knowledge to play this very diverse group of instruments including the accordion! David Crowder has had his music reach spot No. 3 on the Billboard Christian Songs with the song I Am, while being very popular in regards to numbers and charts most people will recognize him from his very long and popular beard that he has kept over the years.

Whether you believe it or not accordion pops up all over the rock music culture. The accordion is a very versatile instrument that can be used to create very specific desired sounds. One of the bands that incorporated the accordion into their music was the Beach Boys. While creating the song Kokomo for the movie Cocktail the Beach Boys decided they wanted something with an added exotic and different sound to it by combining the accordion with the steel drum. Van Dyke Parks was called and asked to help record the song and the rest is history. Another song they feature accordion in is Wouldn’t it be Nice. Check out the videos below to learn how they did that as well as listen to Kokomo.

In the movie Shrek 2 one of the songs in it is called Accidentally In Love sung by the Counting Crows. While that song in particular does not host any accordion in it, another one of their famous pieces entitled A Long December is spilling over with accordion start to finish.

Country music is a culture that has blended with the times and has had the opportunity to host the accordion in its music.  One band that the accordion can be found in is The Band Perry. The Band Perry is an American country music group that consists of 3 siblings. They have been performing together since 2005 and have had a lot of success throughout the years. One of their very popular songs is called If I Die Young and hosts the ever-present HOHNER brand accordion. These siblings are one to keep an eye on and enjoy!

Have you ever sat down on the couch or in the movie theater to watch a new movie and half way through you realize that the music being played in the background sounds familiar?  That’s because the accordion can be found in just about any genre of movie. When I found that out, I immediately started listening a lot closer to all of the background music that makes a movie flow so well. As I questioned further I found out that an accordionist by the name of Frank Morocco has made a huge impact in the world’s movie culture. Some of the movies he has played in include; Adams Family, Back to the Future, Batman, Cabin Boy, Iron Horse, James and the Giant Peach, Ice Age, Holes, Jungle Book, National Treasure, Never Love a Thief, Pink Panther, Polar Express, Raiders of the Lost Ark, Ratatouille, Sea biscuit, Sleepless in Seattle, The Wedding Planner, Woman in Red, and many, many others.

Not only can accordion be found in movie soundtracks but in Television Shows as well; from science fiction shows such as Star Trek to Comedy such as M*A*S*H, and even mystery series such as Murder She Wrote. If you look up Frank Morocco’s biography online you will find that he has played for 364 different movies and 117 television shows!

I hope you were as pleasantly surprised by some of the styles listed above, as I was when I found them. The accordion is everywhere! My ears will be listening all the more harder whenever I turn on the radio or the television from now on. I encourage you to explore other styles of music than what you are used to and who knows, maybe you will be surprised with where you find the accordion!

What are some unexpected places you have found the accordion?

1 responses on "Accordions in Unexpected Places"