Be A Scale Hero | Part Two 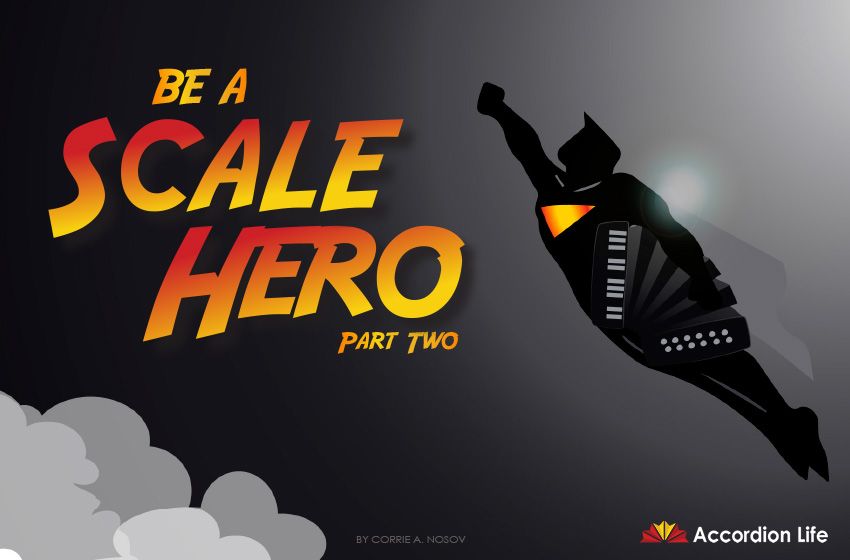 Faster than a chromatic scale, powerful like a Hohner Fun Flash, able to play long scales in a single moment!  It’s Scale Hero! Last time, we learned the C, G and F major scales for both the treble and bass sides of the accordion and we learned how to apply the same pattern for the bass to play major scales in any key.

Known for its triumphant, joyous and sometimes warlike sound, the key of D major has been used for songs like Everything by Michael Bublé, Our Song by Taylor Swift and Wake Me Up by Avicii.

THE A MAJOR SCALE

A major has been described as a joyful and pastoral key signature that embodies innocent love, satisfaction, hope, and cheer. Songs written in A major include Here Comes The Sun by The Beatles, Someone Like You by Adele, The Final Countdown by Europe, Africa by Toto, and Billie Jean by Michael Jackson.

Look — three sharps! (Illustration 3) The A Major Scale also uses F# and C#, but it adds a G# into the mix as well. Line up your fingers with finger one on A. Finger two will be on B, finger three on C#. These are your first three notes. After you have played them, realign your fingers for the next notes and follow the diagram in Illustration 4. Note finger three is on a black key in both positions! Practice playing up and down the same way you have practiced your other scales and have fun!

Ah … the key of E major. This key has been described as delightful, joyous and happily noisy. At the same time, it has been said to sound quarrelsome. I’ll leave it up to you to decide which you think it is! This key has been used in songs such as Isn’t She Lovely by Stevie Wonder, My Heart Will Go On by Celine Dion, Uptown Girl by Billie Joel and What Makes You Beautiful by One Direction.

There are four sharps in our E Major Scale! (Illustration 5) No need to worry — this is easy for Scale Hero! The four sharps are F#, C#, G# and D#. Take a look at Illustration 6, and you’ll see that on your way up the scale, finger one plays E, then fingers two and three slide up on F# and G#. This may feel a little funny at first, but you’ll get comfortable the more you play it. Drop your shoulder and slide finger one under finger three, and line up your fingers. Now fingers three and four will be on C# and D#. You’ve got this!

THE B MAJOR SCALE

Onward to our final major scale — the B major! In later issues we will get into the sharp/flat major scales. (Which aren’t scary at all!) But now, back to B! This key signature has been described as one of wild passion, containing anger, jealousy, fury, despair and every burden of the human heart. It’s clearly an emotion-packed key. Songs that have been written in the key of B major include Pray by Justin Bieber, Unchained Melody by The Righteous Brothers, Who Am I by Casting Crowns, Sweet Caroline by Neil Diamond and In Color by Jamey Johnson.

Look at Illustration 7 and notice the five sharps! Not a big deal because we’ve just scaled E major with its four sharps. The B Major Scale adds the use of A#. With finger one on B, follow the diagram in Illustration 8. Play up each finger and you have your B Major Scale!

Minor scales are reminiscent of rainy days, sadness, loss and deep emotion. Songs written in minor keys include Stairway to Heaven by Led Zepplin, 7 Years by Lukas Graham, I Miss You by Adele, and Feeling Good by Muse.

There are three types of minor scales: the natural minor, harmonic minor and melodic minor. Each one has it’s own unique characteristics. The harmonic minor is the most commonly used so we’ll look at that one today. In the future, we will feature the other minor scales. Similar to the major scales on the bass, once you know the pattern for the minor scale, you can use it for any minor scale you need. I’ll be using the Hohner Piano Squeezebox Accordion app to show you the patterns for the C Harmonic Minor Scale.

The first two patterns are very similar. Place finger three on your C bass and reach finger two up to your D. Stretch finger five down to Eb. Play them in this order: middle, top, bottom. C, D, Eb.

Drop finger two down to G, and with your fingers lined up, reach finger three to F and finger five to Ab. Again, play middle, top, bottom.

Almost there! Reach finger two up to play B (Counter bass of G). End with finger three on C. That’s your harmonic minor scale!

Below is the notation for the harmonic minor scales. Take a look at the finger numbers below each scale. Every single one is the same! How cool is that!  A quick hint that you may or may not know: when you see an underlined number under a bass solo or anywhere in your notation for the bass, that means that the note you will be playing is in the counter bass row — the one closest to your bellows.

Congratulations! You’ve now journeyed through many of the major scales on the treble side of your accordion and learned what you need to master harmonic minor scales on your bass!  Enjoy the journey, use your scales as warm ups for your practice time — play up and down both bass and treble scales.

How are you doing with your Scale Hero journey? Let me know in the comments below!

Featured in the 2016 Fall Issue of Accordion Life Today.